Vaginal infections are one of the most common reasons for women seeking gynaecological advice. Normally the vagina is kept healthy by bacteria (Lactobacilli) that make the vagina more acid and resistant to infection. The Lactobacilli metabolise glycogen in the epithelial cells of the vaginal skin and produce acids, natural antibacterials and hydrogen peroxide which produce a normal vaginal pH 4-4.5.

Most vaginal infections are either due to Thrush (Candidiasis) or Bacterial Vaginosis (BV). Most times the cause is clear from the differing symptoms between the two (see table below)

Thrush is a vaginal infection with microscopic fungi or yeast (Candida) and 75% of women will have vaginal thrush at least once in their lives. Hormonal changes such as pregnancy or treatment with antibiotics make infections with thrush more likely. Treatment is often incomplete and 5-8% of women will have ‘recurrent candidiasis’, which is defined as more than four episodes a year.

Most women know the simple measures to avoid thrush – wear cotton underwear, avoid tight clothing and using soaps or antibacterial washes on the area and reduce sugar and yeast intake in food and drinks.

Probiotics like acidophilus have been around for many years, recommended by naturopaths and other alternative practitioners and used by many women but with very little scientific evidence of their benefit. Because they are a natural product, many women feel more comfortable using them rather than an antifungal. Recently, Blackmores released a new probiotic, Women’s Bio Balance™, which contains large numbers of Lactobacilli. This has been tested scientifically and shown to increase numbers of Lactobacilli in the vagina and improve the successful cure rate for women treated for thrush.

In most cases of thrush the infecting organism is Candida albicans but occasionally it can be other species of Candida. The importance of this is that these other species are often more resistant to usual medications for treating thrush like Canesten™ or Nilstat™. 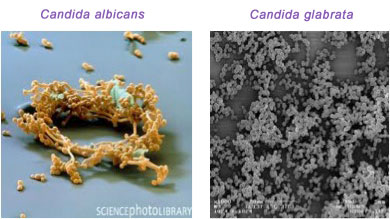 The infecting organisms in women who get repeated infections are also often more resistant and this is one of the main reasons that women get recurrent candidiasis.

Thrush is best treated initially with an antifungal like Canesten or Nilstat together with oral Diflucan™ tablet which will eradicate the Candida from the bowel. I also recommend starting Bio Balance, two tablets daily for two weeks, then one tablet daily for three months. Pessaries (tablets inserted vaginally) are less messy and often more effective than cream. Canesten pessaries come in one, three and six nights. The single dose is usually curative for an initial infection but six nights are more likely to be successful in recurrent candidiasis and particularly in pregnancy.

Your partner doesn’t need to be treated unless he has symptoms – redness and/or tenderness on his penis – or you have recurrent candidiasis (see below). You should not have sex (vaginal or oral) until you are completely better.

Recurrent candidiasis can be a tedious, debilitating condition. Often by the time that women come to see me they are so confused by what is happening to them – what makes it worse, what helps, what medications they have tried, etc., that it takes some time to go through the history and work out a plan of treatment. Many find that it recurs after sex or periods, and that they are never without a slight tingling feeling. It is very common in pregnancy where it can be troublesome because most women try and avoid medications when they’re pregnant. Most women with this condition have tried many different measures including body washes, Vaseline™, antifungals, steroid creams, probiotics, various diets and the common measures like wearing cotton underwear and loose fitting clothes. Most also feel that they are ‘unclean’ although my impression is that most of them are more obsessive about vulval cleansing than is normal.

The underlying problem in recurrent candidiasis is most often a failure to completely eradicate the thrush, leading to a long term, low level infection, often with a relatively resistant organism which is reactivated by sex, periods, wet swimming costumes, antibiotics, etc. This is one of the main reasons that vaginal swabs are often negative in this condition – at the time the swab is taken the number of organisms is low and therefore not detected by the swab. I always take a swab and, if it is positive it is helpful, but a negative swab doesn’t either prove or disprove that the underlying cause is thrush.

I think you need to be supervised in the treatment because many women have ‘lost the plot’ by this stage and need guidance. It is also important to ensure that the problem is thrush. Other conditions that can cause vulval itching/soreness are inflammatory skin conditions like eczema and psoriasis, chemical irritation, menopausal changes and viral infections like Herpes.

My usual treatment plan is:

Boric Acid is used because the organisms are more sensitive to this. Unfortunately it has to be made up at a compounding pharmacy but these are widely available. If you want more information about dietary measures for treating thrush I recommend you contact: www.shepherdworks.com.au and they will do a consultation by phone or Skype.

I find women with recurrent candidiasis need close follow up to reinforce the treatment and deal with any problems. One of the other problems that develops is that the skin of the vulva becomes very sensitive because of recurrent infection and, often, excessive cleansing. This can make the diagnosis tricky and there is often some trial and error to see what is effective.

This is usually a much simpler condition to treat. The diagnosis is made on the basis of the symptoms (see table above) and vaginal swabs will show ‘clue cells’ – vaginal skin cells studded with the organisms (see picture below). 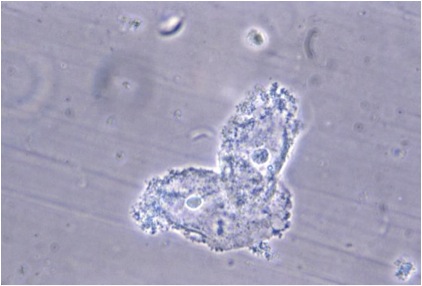 Clue cells – vaginal epithelial cells that have bacteria sticking to their surface, obscuring their borders, and giving them a stippled appearance.

The most prominent and distressing symptom is usually the smell which is described as “fishy” (or worse!). The treatment is oral Flagyl™ for 3-5 days or intravaginal clindamycin cream (Dalacin-V™) daily for 7 nights. I tend to use the Flagyl for first infections and the cream if it has been treated before or the infection has been present for a while. Studies have shown that Bio Balance also improves the rate of successful cure of BV so I usually start this at the same time and continue for at least three months.

Vaginal swabs will often come back with various different bacteria – Streptococcus B, Bacteroides, Staphylococcus for example. Unless there are signs of infection – odour or redness – these are not usually significant and are contaminants from the rectum.